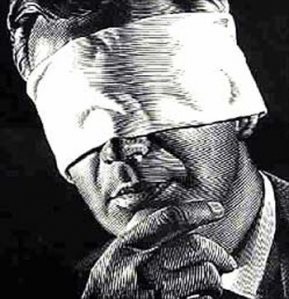 They say that the first bite is with the eye, but it’s not the bite that you remember, it’s just the one that lures you in, the tease but not the taste.

If you close your eyes, clear your mind and summon up the memory of the last good sex you had, what do you recall?

Or their taste in your mouth?

Or the wet warmth of their sweat-slick skin?

Or the sound they made, gut-deep and involuntary when the rapture finally hit?

Or that sensation, immediately afterwards, when you and they momentarily merged into an us warmed by a post-coital glow?

The truth does not lie in what you see; it is etched in flesh by sweat and tears.

The eye is too easily tricked by glamour, too readily rejects the unusual, too willingly settles for observing without touching. Those who feed only with the eye breath without living.

Perhaps I have a twisted view on this. My eyesight is not standard issue. I have no binocular vision, so no depth of field. I literally lack perspective. I can’t see the 3D in 3D movies, and I’m colour blind. I long ago learned that what I see must be tested before it is trusted

Not surprisingly perhaps, my stories rarely start with what my eyes tell me. I write with my ears instead, most often starting with a voice, not a face. My characters speak to me and I write down what they say.

My two most recent stories start more or less with the first thing that the character said to me.

“Sandie was my type of woman: alone, a little drunk, more than a little overweight and flashing her flabby flesh like a fritzing neon sign on a rundown whorehouse.”

I can hear this man. His accent is modified received pronunciation with just enough of the edge shaved off to stop him from sounding posh.  I know immediately that I don’t like him. He is a repellent mix of high insight and low humanity. He is intelligent, introspective, even witty, which makes it  harder to forgive that he is a narcissistic prick bastard.

What I don’t know is what he looks like. It turned out that the plot required him to be attractive enough to be out of Sandie’s league but that is all I know about his appearance.

Can you see this man? Have you met him? Would a physical description from me have helped you see him any more clearly?

“My name is Jonas Kale. I am forty-six years old. I was married two days ago. By dawn the Sisters will have taken the last of my breath from me and I will be dead. Most of my strength has already been drained away. The face I see in the mirror is that of an old man, hollowed out by life.

I have determined to spend my last hours recording what has happened to me. I know it will be difficult to believe. I ask you to remember that I am a dyeing man with nothing to gain from lies and nothing left to lose from the truth. I do not intend to rail against my fate. I am the architect of my own demise. I hope that by exposing the Sisters for what they are I may save some other soul from their clutches.”

This man’s voice tells me that he is in shock. He knows what’s happening to him, he just cannot quite absorb it. He is a self-regarding man, slightly pompous, slightly too serious, who has somehow become engaged in something that will suck his life away.

Can you see him? Do you know the kind of man you would cast to play him in the movie version? Perhaps not quite yet, but by the end of the story you will see him even though I never describe him.

The only time that I start with an image is when a painting catches my attention. Even then, I don’t really write about what I see, I write about the voice I hear from the painter.

It seems to me that painters are even more obsessive than writers. They spend weeks focused on making a single image perfect. When they get it right, I can spend months, sometimes years, navigating the layers of meaning that they have  built up one brushstroke at a time

I’m currently drawn to the work of the work of Katherine Doyle.  The picture below is one of hers.

Katherine Doyle is sometimes described as a realist figurative painter. It seems to me that the reality she presents is very specific. It is a riddle hiding in plain sight. The images seem natural but they are not in the least neutral. The colours, the point of view, the body language, create an atmosphere that has a distinctive emotional flavour.

There is a secret in the picture of this young woman that I can almost grasp. It calls to me just a plainly as the voices I hear in my head so I have set about trying to write a story based on it.

The process is a little like holding a séance: I clear my mind and listen for voices. In this case I hear a woman’s voice: not the woman in the painting, the woman looking down at her. I sense love tinged with guilty desire, heightened by fear and sustained by hope. I don’t know her story yet, but I know that she wants it to be told. Perhaps, if I keep my eyes closed and write blind, she will speak to me.

If she does, I’ll let you know.

This site contains adullt material and is not suitable for minors

Although access to this site is free, everything published here remains copyright protected. Read, enjoy, send me a mail to tell me what you think of them, but don’t post or publish these stories elsewhere without my permission.