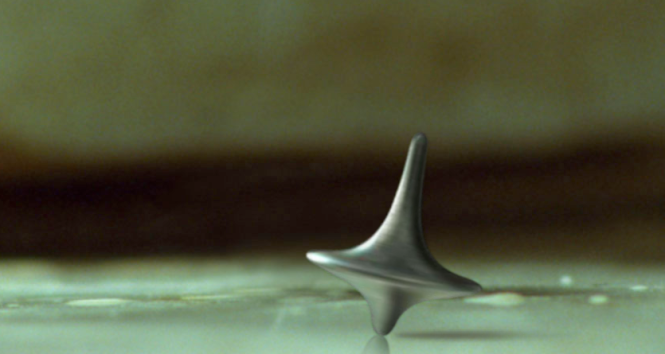 The spinning top pictured at the beginning of this post comes from the movie “Inception”.

The conceit around which the movie is built is the ability to enter a person’s dream, shape it and plant an idea that they will later think of as their own. This of course grants great power over the dreamer. As one of the characters puts it, “The seed that we planted in this man’s mind may change everything.”

On one level, “Inception” is an explanation of what movies are: they shape the collective dream and reach out beyond the dream into the real world. They make the dream more than real and add dreams to our reality.

Movies can plant an idea deeper than just about any other medium. Our conscious minds see them just as entertainment and sometimes that is all they are, but many times, perhaps most of the time, the surface narrative hides the real interaction between movies and our way of viewing the world. We leave the movie without fully realizing the nature of the seed that has been planted.

Often the movie-makers explain their intent:

“Fight Club” was a wake-up call for the IKEA generation who were being sold a consumer dream that they were paying for by spending more and more time at work; they were wasting their lives chasing a dream rather than living in the here and now. The narrator lays this bleak thought before us when he says, “This is your life and it’s ending one minute at a time.”

“The Village”, is about a group of people who have constructed a way of life that is meant to keep everyone safe. But the Village is built on a lie that the elders know and will not discuss and which the young feel but cannot name. The message is pitched by one of the main characters, “We cannot run from heartache… Heartache is a part of life. We know that now.”

“The Matrix” was, in its way, another look at the truth that “Fight Club” set out to plant. At one point the “truth” about the Matrix is explained: “… you are a slave, Neo. Like everyone else you were born into bondage. Into a prison that you cannot taste or see or touch. A prison for your mind.”

Yet even when the movie-makers tell us clearly what they are doing, we leave the theatre with so much else in our minds (“The first rule of Fight Club is…” “I: Let the bad color not be seen. It attracts them…” “I need guns. Lots of guns”) their inception passes unnoticed. When, slowly, the opinion forms that all might not be what it seems and the truth is ours to discover, the idea seems like our own.

When I write short stories, I aspire to use my few thousand words to carry out an inception of one kind or another, but I am aware that text is sometimes less effective than movies at this kind of thing.

I am passionate about movies and novels and short stories and yet I recognize that I experience and remember them differently.

Few things in life give me more pleasure than movies. I don’t just watch a movie, I enter it. I concentrate on it to the exclusion of everything else.

A good movie will slip into my mind and stay there forever. I replay scenes in my head, sometimes without realizing that I am about to, long after I have seen the movie.

Of course, novels and short stories also have their place in my mind but it seems that the interaction with my imagination and memory is different.

Texts tend to devolve into plots and characters and flashes of language. They are driftwood on the beach; ready to be reworked into something else.

Movies seem to retain their integrity. They colonize my imagination, growing into a spectacular coral reef that each movie adds to.

So what is it that makes the difference? What lessons should I carry from movie-making into short story writing that will help me to colonize the imaginations of my readers?

I believe that the power of the movies comes from one simple shared assumption between the movie-maker and the audience: nothing in a movie is unnecessary, irrelevant or accidental

Real life is so full of random noise and mindless soul-numbing repetition that even those rare moments that mean something to us can sometimes slip past unmarked.

Movies are packed with 100% meaning; this is what gives them the intensity that makes them so much more attractive than real life.

The average movie does not have long to tell its tale and plant its ideas, typically between 90 and 110 minutes. The main purpose of the editing after a movie has been shot is to make sure that not one minute is wasted.

The difference between a good movie and a great movie is often about the decisions that were made in the editing suite. In movies, every moment, no matter how beautifully shot or skilfully acted or perfectly scripted, has to fight to show that it is necessary to the meaning of the movie.

Take-away: try to shorten your story without reducing its impact or diluting its meaning

I fall in love with my prose as I write it. I need to fall in love to get it right. Sadly, not everything that I love will pass the tests of relevance and intensity of semantic value. I need to leave myself the time to get the distance to see this and then cut away some of what I loved to make the rest better.

2. Meaning in a movie is collaborative

The story is told not just from the script but from the the lighting, set dressing, the costumes, the acting, the filming, the directing and of course the editing. Movies are so rich because their meaning is built in layers that complement or counter-point one another like chords being played on some great organ.

Take-away: align the different elements of story-telling to maximise the meaning and the impact

Go back through your story and make sure that the elements of your writing are appropriately aligned. Do the language and imagery build the meaning of the story in the way that film music and lighting would? Do your descriptions of places and people dress the set and establish location? Does your narrative drive the flow of the reader’s imagination the way a camera angle would? Can you get the same meaning with less words by changing the balance of what you try to achieve through these different elements so that each of them makes the optimal contribution?

3. Meaning in a movies is emergent

The audience builds the meaning of the film as it goes along. The movie guides them in arriving at the intended meaning by various forms of foreshadowing or the recurring use of symbols, colours or sounds.

Take-away: give your reader’s clues to follow and patterns to spot and trust them to make the connection

If your readers trust that everything in your story has meaning, then they will enjoy spotting where you have foreshadowed the development of plot or character and they will read day to day actions as having significance beyond their surface appearance. In my recent story “Coming Home” I described the mundane act of a man arriving home from work by saying he: “put down his suitcase and laptop bag in the hall and dropped his keys and his phone into the square leather tray that Gina had taught him to use. She had bought the tray out of frustration at his endless ability to mislay the things that were most important to him.”

One of the first comments that I got on the story recognized that the whole focus of the story was the man’s endless ability to mislay the things that were important to him.

4. Meaning in movies is condensed through the use of known tropes, plots and stereotypes.

Movies are clearly labeled. The audience walks in with an expectation that needs to be met. The use of tropes, stereotypes and well-known plot lines speed up the immersion of the movie goer into the move. They provide a familiar landscape for meaning to emerge into.

Take-away: don’t be afraid to draw on tropes and archetypes to move your story along.
Clichés, stereotypes and tropes can be your friend in keeping a short story short. I agree with Sam Goldwyn’s view that, “What we need are some new clichés”. This needs to be done with skill or it ends up being boiler-plate. Think of it as evoking an image or relationship in your readers’ imagination without needing fully to describe it.

Movies use tropes and stereotypes to misdirect our attention and lead us to the wrong conclusion. They play with time-lines to reveal information that changes what we thought we understood. This delights the audience if it’s done well (The Sixth Sense, The Usual Suspects, Memento, The Illusionist) and reinforces the idea that you should pay attention to every moment of the movie.

Take-away: it pays to surprise your reader without making them feel tricked.
This can be done by the use of an unreliable narrator, or by planting a hook at the beginning that sets one expectation and then flashing back to show another interpretation,or by taking a stereotype and giving it an unexpected twist.

I’d like to share one last idea. The seed for this one was planted in my mind by “Inception”. The movie explains that there is a risk to shaping dreams. To shape a dream you must enter it. You must believe it. You must belong in it. How then, will you know that you are dreaming and not living? That is what the spinning top is for. You take it into the dream with you and spin it. Only in a dream can it spin forever.

Writing is an isolated introspective business. We spin tales from the fabric of our lives and imagination and doing so can be thrilling. But we also need to live and to connect. We need to know that in real life the top stops spinning and we need to welcome that.

This site contains adullt material and is not suitable for minors

Although access to this site is free, everything published here remains copyright protected. Read, enjoy, send me a mail to tell me what you think of them, but don’t post or publish these stories elsewhere without my permission.